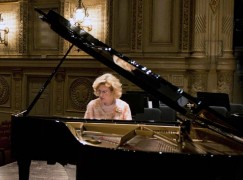 A transgender concert pianist finds hope across the border

He played concertos with the New York Philharmonic, Cleveland, Philadelphia and other top orchestras until , in 1998, he underwent gender realignment surgery and became Sara Davis Buechner.

Since then, says Buechner, US orchs have slammed their doors. If it weren’t for Canada, she’d despair.

‘Canada was my salvation in many ways,” she tells the Calgary Herald. ‘The conductors and presenters in Canada were much more open, because they hadn’t really known me. They judged me on the music itself.’

« A prime minister gets new orchestral score for his birthday

Shostakovich in America: how many composers can you name? »