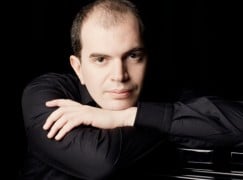 A Rubinstein winner on the perils of finals

Kirill Gerstein, who won the Rubinstein in 2001, has been talking to our SanFran pal, Elijah Ho.

Gerstein: The funny thing about competitions is that one has to be careful about the final rounds. By the time they come around – there’s probably web-streaming and more people are tuning in – very often the performers are tired, and they haven’t toured with their concertos with orchestras in thirty or forty different cities over the past ten years. So I sympathize with the finalists. It’s not an easy experience. Very often, the finals of the larger competitions are actually weaker than some of the playing in the earlier rounds, and this certainly invites criticism. Some will say, ‘well, this year wasn’t very strong, how could this be the best ?’. The ‘meat’, I would say, is probably found in the earlier rounds.

To win a competition, things probably went very well for about two or three weeks against a group people and under whatever circumstances. From then on, everybody says, ‘well okay, let’s hear the new Rubinstein or Cliburn winner’, and every presenter and musician you come in contact and play with, is a test. It’s a much more serious situation than the competition, which is a prelude to that.

If I practiced a lot before the Rubinstein, I was practicing and working in various ways a lot more after I won. They will ask you if you can play this piece or that piece, and it’s no longer perfect lab-conditions, where you can prepare for as long as you’d like, where you select your own repertoire, etc. My advice is that it’s important to be prepared for that eventuality, to learn as much repertoire as possible.

There’s also the necessity to try to quickly convert yourself from a Rubinstein winner, or a Leeds winner, or a Van Cliburn winner, to whatever your name is. Because there is going to be a ‘next winner’ in the coming years. If presenters and audiences simply identify you as the current winner, your shelf-life is only three or four years. So this is where individuality and personality needs to be projected.