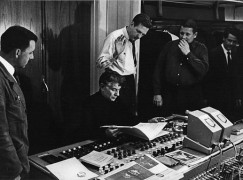 A classical record legend has died

We’ve been informed of the death of John McClure, director of Columbia Masterworks in the golden years and producer of all the late Bruno Walter sessions and many of the Leonard Bernstein recordings. Not to mention 35 records with Igor Stravinsky. And much of Glenn Gould.

John was a reserved, disciplined figure in a company of peacocks. Like John Hammond in the pop division, he had an ear for young talent and an unshakeable rigour. He signed Terry Riley and Philip Glass, only to get overruled by top brass. He was considerate, compassionate and ever protective of junior staff. A lovely man, by all accounts.

Here’s one of the last interviews he gave. There are very few photographs in circulation of this shy, essential man.