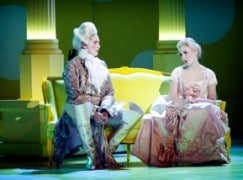 Your first free Rosenkavalier of the Strauss year comes from….

Who’s offering to review it for Slippedisc?

In celebration of the Richard Strauss Year:

directed by Dmitri Bertman and conducted by Leif Segerstam

Mark your calendars for the May 16 livestream of Der Rosenkavalier, one of the crown jewels of the opera world!

Some know it as The Knight of the White Rose. But under any name, the opera is recognized as a masterpiece, created by two geniuses of their genres- composer Richard Strauss, and librettist Hugo von Hoffmannsthal, one of the German-speaking world’s literary giants.

Set in opulent Vienna, the story is as universal as love itself. An older woman loses her young paramour to a younger rival but gains in the acceptance of the necessity of recognizing that it’s time to let go.  Intertwined with that bittersweet process is a comic subplot that focuses on the attempt of a lecherous old baron to replenish his coffers by marrying the young daughter of a rich but socially lower family. Those who know the opera can attest that the results are hilarious.

Coming to you from the Malmö Opera in Sweden, the production stars an up-and coming international cast, backed up by Dmitri Bertman, director of the Helikon Opera in Moscow and Finnish conductor Leif Segerstam, both seasoned veterans of the musical stage.

Charlotte Larsson is the Marschallin, the beautiful noblewoman who loses her young lover to a younger rival in one of the operatic world’s most poignant roles. One of Sweden’s most successful lirico spinto sopranos, she interprets the role with intense sensitivity, building on impressive performances including Aida, Mimi, Rusalka, Cio-Cio San, and Tatiana.

Octavian is sung by Dorottya Láng, a young Hungarian mezzo with an impressive top range and a career to watch. A member of the Vienna Volksoper, she has been engaged as an ensemble member of the Nationaltheater Mannheim. Winner of the Emmerich Smola Förderpreis in 2014, her interpretation of the Marschalin’s young lover promises to set the golden standard for her generation.

Swedish soprano Sofie Asplund is Sophie, who turns the head- and heart- of Octavian.  The winner of  last year’s honorable Birgit Nilsson Scholarship and other awards, her role adds to her previous repertoire of Mozart, Cimarosa, Britten and Janacek.

Runi Brattaberg shines as the bumptious Baron Ochs, whose plot to fill his pockets by marrying Sophie is foiled by Octavian. Brattaberg is no stranger  to the role- he appeared as Ochs in Amsterdam under the baton of Sir Simon Rattle and at the New York MET and in Cincinnati.

« The photo library in the 21st century