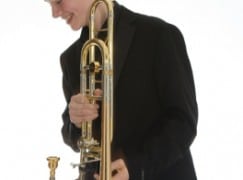 Youngest ever player in an international orchestra?

Social media are abuzz with our news of the London Symphony Orchestra’s appointment of an 18 year-old co-principal trombone.

He’s the youngest principal in LSO history, that’s for sure. But there must have been some younger players in the ranks.

Neville Marriner, 90 last month, was playing in the LSO second violins at 15 in 1939 when senior players were called up to war. And there must have been more his age in other combatant countries.

So who was the youngest player ever to have won an appointment in a major orchestra?

UPDATE: The ball has started rolling.

Gregor Piatigorsky, at 15, was principal cellist in the Bolshoi Theatre orchestra.

Raymond Cohen, a violinist of 15, was the youngest ever to join the Halle Orchestra.

Peter Steiner, a 48-year vet in the Berlin Philharmonic, started at 16 in 1944 as a cellist at the Deutsch Oper.

Stanley Drucker, clarinet, entered the the Indiannapolis Orch at 16 and the New York Phil at 19 (H/t Andrew Condon).

Arthur Isadore Berv, horn, joined the Philadelphia Orchestra in 1923, when he was 17.

Michael Thompson was appointed Principal Horn of the BBC Scottish SO when he was 18 (h/t Anthony Kershaw).

Gunther Schuller was 17 when he was named principal horn with the Cincinnati Symphony Orchestra (1943–5). Before that he played two years with American Ballet Theater. (h/t: Harold Braun)

Emmanuel Pahud was 18 when he was named principal flute ay Basle Radio Symphony.

Arnold Rosé was 17 when he took the concertmaster’s seat at the Vienna Opera in 1881.

Charles Treger, according to a 1976 newspaper report, joined the Detroit Symphony violins at age 15, which puts him in the lead.

Venezuelan double-bassist Edicson Ruiz entered the Berlin Philharmonic when he was 17, the second youngest player in its history. He had to wait three years for tenure.

The youngest Berlin Phil player was a harpist, back in the 19th century.

Roger Voisin became assistant principal trumpet of the Boston Symphony Orchestra at 17 in 1935; he became #1 trumpet in 1950.

Paul Renzi became principal flute with the San Francisco Symphony in 1944 at age 18.

Manuel Huber, horn, joined the Vienna Opera orchestra at 20. He remains the youngest member of the Vienna Philharmonic.

Message from the Chicago Symphony Orchestra:

Adds Frank, “But since we don’t have birth records for all of our members (particularly from the earliest part of our history), it’s impossible to ever definitively say who was the youngest.”

New research: Cynics are more likely to get dementia »