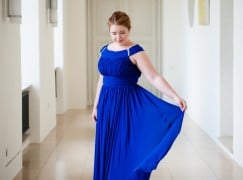 Winners and whiners in the big, fat opera row

Ever since Slippedisc.com set the ball rolling on Monday morning, drawing attention to the verbal assault on a young singer by five scratchy male critics, we were alert to the possibility that reputations might suffer in the ensuing storm.

Some did. By Friday, the issue of body size in opera was being aired on American breakfast television and across many forms of media in which opera never gets an airing except in terms of envy and ridicule.

So who has come well out of the furore?

– Tara Erraught, the beautiful young Irish singer, who is presently the most famous mezzo on earth and will never want for work. Nor need she fear further assault. The male critics will not dare.

– Alice Coote, the first artist to see the issue as a matter of principle, appealing to the opera world to reject the demands of body fashion – some may read that as body fascism – and give the voice priority in what is, at base, a vocal art. Alice has greatly enhanced her status as an intelligent artist and fine singer, even – and especially – among the offending critics.

– Glyndebourne, quick to announce its support for the singer.

– Richard Morrison and Michael Church, two critics who apologised for the offence they gave.

– NPR’s Anastasia’s Tsioulcas, who nailed the critics for misogyny and breath-taking arrogance.

And who has emerged from the fray weakened?

– Three stubborn critics and the Daily Mail who maintain that a man in the aisles is entitled say what he likes. (They know full well that singers cannot be disparaged for their race, colour, gender and sexual preference. Why, then, can they be attacked for body shape?)

– Numerous newspaper editors, who were late, lame and unenlightening on the issues.

– The Daily Telegraph, for multiple lapses of taste and editorial judgement.

– The conducting profession, which failed to exercise its authority in defence of an embattled artist.

– The BBC, which played catch-up to other media and did no original journalism or opinion forming on any channel, radio or TV.

That’s it. All over now. Have a good weekend.

« Alice Coote: What opera needs is a dose of tough love

New video: How to sing Wagner the Gwyneth way »