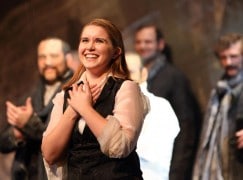 In his defence of the corpulent adjectives he used to describe a comely young singer in Glyndebourne’s Rosenkavalier, Richard Morrison, chief music critic of (London’s) Times, wrote on Thursday:

‘The Times has yet to receive a single letter, email or online comment objecting to what I wrote. Which suggests that the general public accepts that when people perform in front of a paying audience, the total image they present — looks, voice, acting ability and suitability for the role — is fair game for critical comment.’

Five of them related to its splash coverage of the big, fat opera row and only one specifically to the original review. This will be intensely frustrating for professional critics, indicating as it does that the review was, at most, skim-read on first publication.

Why is that? Consult the stars.

In a former life, as assistant editor of a formerly respected newspaper, I fought hard and successfully against the blight of applying star ratings to reviews of live performances. My argument was that once readers counted the stars they would not bother to read those reviews. Of all my gloomiest predictions, I fear this one has been most fully validated. When I stepped down, the stars took over.

Today, critics whose columns are unadorned by stars stand a chance of getting read down to the very end. The rest must hope for a scandal or a miracle to secure close attention from a general readership.