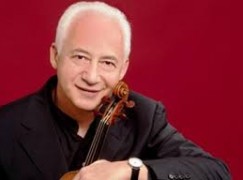 Some 40 people staged an anti-Putin demonstration outside Sanders Theatre at Harvard during a concert by Vladimir Spivakov and the Moscow Virtuosi. One young man staged a demonstration on stage. Spivakov allowed him to make a statement, then asked him to leave. When the student refused, he was arrested. New video here.