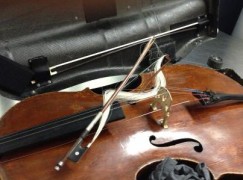 US makes it easier to fly with ivory tips. Beware the strings attached

There has been a slight easing of the draconian US ban on entering the country with prohibited bits of African elephant.  The U.S. Fish and Wildlife Service (USFWS) has told Customs official to go easy on violin bows, provided certain other conditions (see below) are fulfilled.

It’s an encouraging response to a huge volume of complaints from musicians. However, it comes with strings attached and the new memo may not be read by the customs official who is processing your entry. So please take care. Here’s the information from the League of American Orchestras:

Ivory Rules for Instruments Eased, Not Yet Fixed

May 15, 2014, Washington, D.C. – The U.S. Fish and Wildlife Service (USFWS) today announced changes intended to ease international travel with musical instruments, agreeing that “common-sense” solutions are needed to address the unintended consequences of the recent African elephant ivory ban. The policy changes are a step in the right direction – in direct response to urgent appeals from the League of American Orchestras and other stakeholders – but are far from a complete resolution to the challenges faced by musicians intending to travel with and purchase existing, legally-crafted instruments that are essential tools of the trade.

Under the latest version of the rules, a musical instrument that contains African elephant ivory may be brought into the U.S. if the instrument meets all of the following criteria:

·         The African elephant ivory contained in the instrument was legally acquired prior to February 26, 1976;

·         The instrument has not subsequently been transferred from one person to another person for financial gain or profit since February 25, 2014;

·         The person or group traveling with the instrument qualifies for a CITES musical instrument certificate; and

·         The musical instrument containing African elephant ivory is accompanied by a valid CITES musical instrument certificate or an equivalent CITES document.
While widening the scope of instruments eligible for travel across U.S. borders to encompass instruments legally purchased in the past 38 years is an important step in the right direction, many serious concerns remain:

·         It is unclear at this time what documentation will be sufficient to prove that an instrument was purchased prior to February 25, 2014. And, instruments purchased after that date, if they contain African elephant ivory, will be banned from entering the U.S.

·         A reliable system has not been built for obtaining CITES permits and navigating complicated enforcement procedures at the very limited number of allowable U.S. ports of entry and departure, and across the globe.  The costs, uncertainty, and risks associated with attempting to travel with permits is a barrier to international cultural activity.

·         Upcoming U.S. Fish and Wildlife proposals to prohibit future domestic interstate sale and re-sale of legally-crafted instruments that contain very small amounts of African elephant ivory will strip essential musical instruments of their value, and render them unavailable for use by future generations of musicians.
USFWS Director Dan Ashe said today, “we have listened to the very real concerns expressed by the regulated community and have made common-sense adjustments.” Dialing back the limitation on the allowable purchase date represents a significant acknowledgement that the use of existing musical instruments that contain small amounts of ivory is not contributing to wildlife trafficking. The League is in ongoing dialogue with the Administration and key policy leaders to continue to seek solutions that address wildlife conservation goals while also protecting international musical activity.