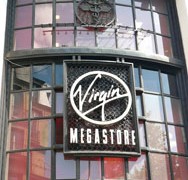 An obituary in yesterday’s Times newspaper has obliged me to doff my hat to the attention-seeking entertainment and transportation mogul whose businesses seem to run more on ego than on fuel.

Now, curb the the criticism. I have reason to be grateful to the high-flying Mr B. According to the eulogy for his sometime close associate Tessa Watts, ‘when Richard Branson set up his record label he nearly called it Slipped Disc.’ Oh, no. Imagine that.

However, the snappy Watts ‘suggested a better name as they were all “complete virgins at business”‘.

Thanks, Mr B, for leaving us the trademark. Rest in peace, Tessa Watts.