The following pianists have reached the final of the 14th Rubinstein competition in Israel:

At least two public favourites were eliminated and there were protests when jury chairman, Arie Vardi (pictured), announced the list. He responded: ‘I am very glad that you are so actively involved in the process.’ 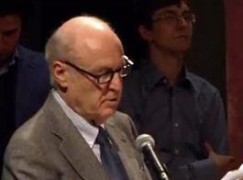 Don’t bother to search for results on the competition’s website. It’s useless.