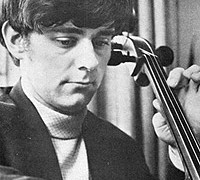 We’ve received news of the death, aged 67, of Douglas Cummings, one of the foremost British cellists of his time.

He was principal cello of the London Symphony Orchestra and a brilliant chamber soloist until his career was interrupted by serious illness in midlife. He recovered, but was never the same again. Our sympathies to Dougie’s family and many friends. He was ever the life and soul of the party, even before the party was announced.

Here’s the official announcement to members of the cello society:

“Dougie” had a distinguished and brilliant career as a performer, starting at the age of 22 when he became the Principal Cellist of the London Symphony Orchestra – a position never previously earned by so young an instrumentalist. He held this position for 24 years, as well as being a member of its Board of Directors.

The LSO became household names through the BBC Television programmes introduced by Andre Previn; Dougie premiered Previn’s concerto and recorded many wonderful orchestral solos with the LSO. He was an inspirational teacher at the Royal Academy of Music, the Royal Welsh College of Music and Drama and Oundle School. Initially a student of Douglas Cameron, Dougie travelled to the USA to take lessons with Gregor Piatigorski.

He worked with some of the music world’s greatest names and obtained particular acclaim through his chamber music, performed with London Virtuosi, the Lindsay String Quartet and the Lake Piano Trio. He was a founder Member of the New Queen’s Hall Orchestra, with whom he made both orchestral and chamber recordings. He was made a Fellow of the Royal Academy of Music in 1977. The London Cello Society honoured him with Life Membership in 2010.

He is represented on the 2004 album The British Cello Phenomen. For much of his career he performed on a fine Giovanni Battista Rogeri cello. He used gut strings with an uncovered gut A string – his distinctive, quality tone production was evident his eloquent, expressive playing. Dougie was a sociable and amiable character, much loved and well-repected by his colleagues.

His infectious laughter and appetite for life were coupled by a deep knowledge of music and cello playing. His career was brought to a premature end when he suffered a series of aneurysms but he continued to entertain all around him with charisma, charm and humour. In the LSO book of 1970 he says: “Firstly music, secondly eating – that for me is living”. Not only will be sorely missed; he is simply irreplaceable.

UPDATE: Click here for a tribute from the LSO. And here for a reminiscence from Carnegie Hall chief Clive Gillinson.

« Your first free Rosenkavalier of the Strauss year comes from….