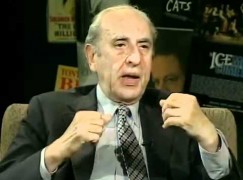 Peter Gelb has lost his father

Our condolences to the Metropolitan Opera general manager on the death of his father.

Arthur Gelb, who was 90, had been an influential figure at the New York Times, where he rose from copy boy to managing editor. It was there that he met married a niece of the violinist Jascha Heifetz and became highly visible in musical circles.

Alternately charming and assertive, Arthus Gelb was vociferously accused of promoting his musical friends in the paper’s cultural pages. The assertion is repeated in an affectionate though unusually well-balanced obituary in today’s paper.

Unions at the Met, which are in dispute with Peter Gelb, have published a sympathy statement (below):

May 20, 2014, New York, N.Y.—The Metropolitan Opera Orchestra Musicians and Local 802, AFM wish to convey our sincere condolences to Peter Gelb and his family on the occasion of the death of his father Arthur Gelb, who changed New York City and the nation for the better, not only as a legendary newspaper editor but as a great champion of the arts. We respectfully honor his legacy, and wish his family comfort in this time of loss.

« So if the Callas movie ever happens, who do you want to play Maria?

‘Dumpy’ singer’s critic: I stand by every word I wrote »