The Bozzini Quartet, heading for the city by rail, faced demands from a train conductor to pay for an extra seat for the cello.

We are unaware of any such precedent. Let’s stop this before Richard Branson hears of it. 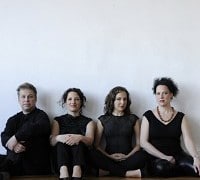