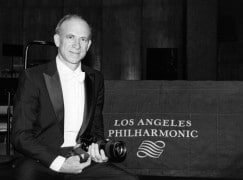 We have been informed of the death of David Weiss, principal oboe of the LA Phil for 30 years until his retirement in 2003. For much of that time, he was also the orchestra’s principal photographer. See gallery here.

A member of a far-flung musical dynasty, his brother and sister both held principal seats in US orchs and hs cousin is the oted composer Mark Neikrug. David, ho suffered a heart attack yesterday, was just 67.

Our sympathies to his family and loved ones.