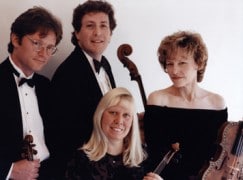 Just in: US string quartet detained at Belgian Customs

A singer’s life: the harsh reality »