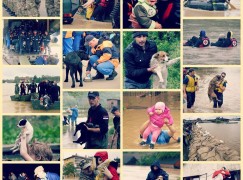 The Belgrade Philharmonic, clearing up after the worst floods in a century, is appealing to musicians and the music industry to join its appeal for Serbia’s homeless and dispossessed.

Dear friends, colleagues and people of good will,

Serbia is facing the worst floods in more than a century.

The severe flooding has prompted the evacuation of at least 24,300 people. It’s the worst flooding Serbia has seen since the country began keeping records 120 years ago. Many cities and villages in western Serbia are completely under water. Тhe situation is critical and  the authorities declared a state of emergency. Volunteers, soldiers and rescue workers have stacked sandbags in towns near rivers throughout the country. It is not just the human cost of flooded homes that is a worry there is an environmental concern as well. Sewage and industrial pollution may be washed back into the rivers when the waters fall.

Having in mind successful and above all friendly cooperation you devoloped with Belgrade Philharmonic, as well as with Serbian people, we most kindly invite you to send your contributions and support efforts which our country is making to reduce the consequences of the tragic floods. For this purpose the Serbian government opened foreign currency account for aid to victims of floods: