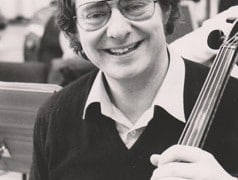 Clive Gillinson: ‘He maddened the rest of us cellists’

The executive and artistic director of Carnegie Hall, formerly a cellist and then chief executive of the London Symphony Orchestra, has sent us this vivid and affectionate tribute to his desk partner Douglas Cummings, whose untimely death was announced today.

Dougie Cummings’ death is a huge loss to the world of cello playing.  He was an astonishing talent who maddened all the rest of us cellists by finding everything easy; I don’t think he understood what the word difficult meant!  Not only was he a great talent and a truly expressive and wonderful player, he was also terrific fun, had a great sense of humor and was a genuine force for good in the orchestra throughout his time there.  He played a number of concertos with the orchestra in very varied circumstances, and I guess not  many principal cellists in any orchestra in the world would have been totally unperturbed, as he was, playing the Shostakovich first cello concerto on an LSO USA tour in a reconfigured cattle market, with portraits of bulls around all the walls and with straw and wood chippings on the floor.  He delivered as great a performance as he would have done in Carnegie Hall.

He was also somebody who had a huge effect on every conductor and soloistwho worked with the orchestra.  His infectious joy of music, totally passionate playing and exquisite sound enthralled everybody who came to work with us.  In addition, his dazzling talent led to him being appointed principal cello of the LSO at a time when he was also the youngest member of the orchestra.  Despite this, he carried the huge responsibility with total ease and great humor.  He is somebody who will remain in the memories of everybody who loves music, loves the LSO and admires great cello playing.

La Scala signs a death warrant, perhaps its own »