‘Chubby’ critics refuse to come out on the BBC

Rupert Christiansen (pictured) has defended his right to insult singer’s body-shape in the safety of his own paper, but he’s too scared to do it on radio, live or pre-recorded.

The BBC’s World at One asked me to argue a case against critical offences. None of the offending critics was man enough to oppose it.

Shame. Nothing was ever gained by timidity. 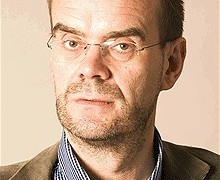 Back to work, then.