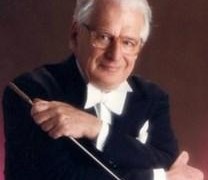 A wandering maestro has died, aged 90

We have been informed of the death in Montreal of Franz-Paul Decker, who was music director of many orchestras around the world,

Much of his secondary activity was in Canada where he served as Artistic Advisor to the Calgary Philharmonic Orchestra (1975–1977) and Winnipeg Symphony Orchestra. He was Principal Guest Conductor in Ottawa (1991–1999) and Edmonton  (2003–2004).

He made a considerable number of recordings, latterly on the Naxos label and was renowned as an interpreter of late-romantic composers, especially Richard Strauss. Our sympathies to his family. Death notice here.

« Hungary is no longer the unhappiest country. It’s Venezuela….

Americans and Brits are shunned in finals of the Reine Elisabeth »