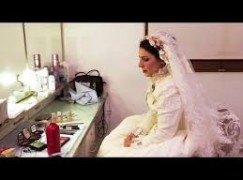 In timely fashion, after the week’s furore over singers’ body-image, the Royal Opera House has released a touching and revealing backstage film of Elizabeth Watts as she prepares to sing Zerlina for the first time in Kasper Holten’s production of Don Giovanni. To get her into the role, Kasper tells her to think of George Clooney, offering to have sex.

Rooted in the west country, Liz is lonely in London (where she stays with friends) and finds no familiar faces in the first rehearsal. The director and conductor are supportive and her husband comes up to be with her but much of the time she is alone, in her head, in her role. When she falls ill, she knows she won’t be paid a penny for all the rehearsal weeks. It has to be right on the night.

A pair of stage knickers have to be engineered to come off with ease.

As Elizabeth takes the long, lonely walk down to the stage, she could almost be a French countess on her way to the guillotine. Her self-possession is nothing short of heroic.

Pinny Gryllis has made one of the most penetrative films we have seen of the solitary existence of the high-flying opera singer.

« New video: How to sing Wagner the Gwyneth way

A new way of walking about opera »