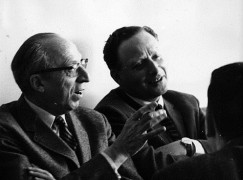 A Fine celebration for his centenary

Tomorrow, the Boston Modern Orchestra Project marks the centenary of Irving Fine, a composer who died tragically young. His daughter, Emily Fine, MD, has written this reflection for Slipped Disc.

My father, known to many as a member of the Boston school of composers as well as the founder of the School of Creative Arts at Brandeis University, would have reached 100 on December 3, 2014.

Sadly, he died abruptly from a heart attack at the age of 47, shortly after conducting his Symphony (1962) with the Boston Symphony at Tanglewood.

I was 10 years old when he died and my two sisters were 8 and 15. The music world suffered a tremendous loss, but for my mother, Verna Fine, raising three daughters, Claudia, Emily, and Joanna, alone at the age of 42, the grief was immense.

She showed remarkable fortitude with the love and support from all those who adored my father, but it was her passion and devotion for his music that especially gave her strength. She continued to remain involved in the music world, promoting his music and the music of other twentieth century composers. She remained close to my father’s dear friends and his devoted students such as: Aaron Copland, Arthur Berger, Harold Shapero, Richard Wernick, Joel Spiegelman and even Leonard Bernstein.

Her advocacy for my father’s music led to consolidating his works with Boosey, partnering with them in various publishing aspects, promoting the performances in her dealings with conductors, chorale groups, chamber groups and various organizations. One of the most powerful relationships she nurtured was with the Library of Congress, the recipient of all his archives, photos, scores, sketches and correspondence. After she died, the Library honored their legacy by creating the Verna and Irving Fine Fund, as well as a wonderful website in the American Memory portal. Brandeis—where he gave so much of himself to create a world-renowned music department— continues to honor him with annual concerts, a funded chair and grants for graduate work in his name. My mother navigated the publication of his biography by Philip Ramey, which was well received. Sadly, she too died suddenly and never actually lived to see the biography released.

But my mother’s not so secret obsession was his Symphony (1962), his only symphony, his last work, and his largest, most complex and perhaps greatest work. We all remember the process— composing was an intense and taxing project for my father—one he could not live without, but one that was hard for a perfectionist. My mother felt strongly that my father’s “new” voice in this piece needed to be heard. So, as we approached the centennial year, the performance of this large work seemed essential—for honoring both my mother and father. For this reason the BMOP concert and Gil Rose’s willingness to work with us is so thrilling. And, the fact that there will be a recording, which will include my father’s works from this concert with a recording done this summer of the other orchestral works, gives the centennial celebrations a greater sense of permanence.

Fortunately, we have had the tremendous support of the Library of Congress and Brandeis. I want to mention, in particular, Nicholas Brown. We met him when he was a music student at Brandeis, having chosen that institution because of the Irving Fine legacy.

His passion for my father’s work has made this year such a positive experience for us all. With his leadership, we have established The Irving Fine Society, which has provided the basic core for advocacy and communication concerning my father’s music and for the centennial. Together we all look forward to a week of concerts, panels, and other activities at the Library of Congress in December of 2014—the true 100th birthday. Brandeis has already honored his birthday with a concert, but will present a full centennial weekend in November. The commemorations joyously started with a performance by Orpheus Chamber Orchestra at Carnegie Hall, and we have and will see performances from Milan to the west coast, by ensembles such as Music from Copland House and the New York Woodwind Quintet. Even I, as an amateur French hornist, have  performed Blue Towers and am arranging a whole Irving Fine concert to include both quintets.

The three daughters have so much to be grateful for. Losing one’s father at such young ages is not easy, but how fortunate are we to have his music. We are also blessed to have children who love music and understand the importance of this legacy. Both my daughter Alison Stein and Claudia’s son Isaac Hurwitz have already been involved and have provided tremendous skills and guidance to us and The Irving Fine Society.

« La Scala signs a death warrant, perhaps its own