FABIO LUISI TO STEP IN FOR LORIN MAAZEL ON SATURDAY, APRIL 12

Maestro Maazel, Scheduled to Conduct on April 11 and 12, Unable To Appear Due to Illness

Conductor for Orchestra’s Friday, April 11 Program To Be Announced

Alban Gerhardt was in Portland, Oregon, with time on his hands. So he took out his cello and played all over town. Watch.

Peaches Geldof was 25, a mother of two. Her death is reported by BBC News.

Our sympathies to Bob, who has done more to address world hunger than a million politicians.

Alain Lanceron is confirmed as president and the label’s base as Paris.

Erato will be the natural home for French artists, Warner Classics for the international market.

You may notice some significant omissions from the ex-EMI artists’ list in the press release below. Their absence, we hear, is intended.

Lanceron’s senior management team includes Jean-Philippe Rolland, today announced as Executive Vice President, International A&R and Business Development, Markus Petersen, Senior Vice President, Global Marketing and Operations and Bertrand Castellani, Vice President, International Catalogue. Dividing his time between London and Paris, Rolland will focus on signing and nurturing the most exciting artists from around the world. Petersen will be charged with continuing to build out the worldwide infrastructure that supports them as well as delivering high-impact campaigns that bring their music to fans existing and new. Castellani will steer an international catalogue drawn from the rich vaults of EMI Classics, Virgin Classics, Teldec and Erato. An additional key appointment announced today is Patrick Gamblin, who becomes Director of Creative Services.

In addition to its Paris-based headquarters, Warner Classics will have dedicated teams in the UK, US, Germany, France and Japan, as well as specialist support from the wider Warner Music operations in other markets. Further local announcements will be made soon.

Bergen said, “Classics is an area of renewed strategic focus for us so we are delighted to have an executive of Alain’s calibre leading our global efforts. He is widely respected for his creative flair, his skill in identifying and nurturing world-class talent and his ability to translate artistic excellence into commercial success.”

“JP, Markus, Bertrand and Patrick are all exceptionally talented executives whose knowledge of the international landscape is second to none and who, working with Alain, will help us to further build and support a roster that truly reflects our commitment to working with the cream of classical music talent around the world.”

Lanceron said, “With the Warner Classics leadership team confirmed and our reinvigorated worldwide network in place, we can now truly unlock the potential created by combining these two extraordinary classical catalogues. The depth and richness of the music we represent only fuels our ambition to sign and develop more remarkable artists and continue to innovate around their work to ensure that Warner is synonymous with the greatest classical music of yesterday, today and tomorrow.”

Recent signings to Warner Classics include opera singers Ailyn Pérez and Stephen Costello, whose debut album is out in May, and the Aurora Orchestra, one of the most creative and innovative ensembles in the music industry today. On Erato, Sabine Devieilhe, Bertrand Chamayou and Edgar Moreau are the latest additions to the roster, with brand new and critically-acclaimed recordings. Forthcoming releases include, amongst many others, albums from Alison Balsom, the John Wilson Orchestra, Joyce DiDonato, Emmanuel Pahud, Philippe Jaroussky and Sir Antonio Pappano. New signings will be announced soon.

Key catalogue releases for 2014 will feature two of the label’s most iconic legacy artists; Herbert von Karajan, with an Official Remastered Edition, and Maria Callas, whose Complete Studio Recordings have been remastered from the original master tapes. These projects represent the very best that anyone has ever heard Maria Callas and Herbert von Karajan on record.

One of the most convivial bookstores in the world has fallen prey to developers and will shut this week. I used to go there in my 20s most days, stressed out from work at NBC News. Within minutes I was a man restored, my head in a book, or locked in conversation with one of the polymath assistants.

There’s a protest going on, but it’s too late to save the store.The wrecking ball is ready to fall. Dammit. 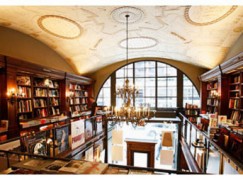 The results are out today from Claudia Fritz’s Paris Experiment and they make bleak reading for the many dealers and auction houses that milk a musical fortune from the sale of old instruments.

Ten international soloists blind-tested six new and six old Italian violins under controlled conditions. More than half of them thought the new ones were old. That blows a big hole in an expensive myth.

Read a summary of the results here.

There is no way this record should have worked. One of the two composers worked for a Catholic court, the other other was a Californian with no fixed sense of tradition. One represents the ultimate in order – old order. The other was a musical pioneer of chaos theory. One was a polysyllabic personage of an over-decorated civilisation. The other was plain John.

Together, they are my album of the week on sinfinimusic.com. Read how that works here.

Another fail day for old media.

USA Today sends its readers to the opera. The only Italian house it selects is the Olimpico at Vicenza, which it mis-spells.

Journalistmaking at its finest. Expect to find it on the Mail site in about ten minutes.

This is unedited video from Arte. You need to fast-forward 13 minutes to the beginning. Andris Nelsons conducts the festival prochesrta, with Isabelle Faust and actor Bruno Ganz. Wonderfully hushed opening of Schubert’s Unfinished Symphony.

The airline has formally apologised for one of its staff abandoning the wheelchair-bound violinist at Toronto’s Pearson airport last week. It has donated half a million air miles to the Chai cancer charity that Perlman was flying in to support.

A character assessment of the composer in Der Standard by the Klagenfurt musicologist Daniel Ender usefully cites most of the known sources about Strauss and the Nazis. Read here.

Now watch this interview with Strauss’s Nazi protector and my own reflections on the character of ‘the least interesting composer that ever lived.‘