Henry N. Cobb was part of a group of architects called in to explore the war-wasted city. Watch his riveting images. Read more here.

These are some of the earliest known notations. h/t Joel Cohen.

And you thought Hamburg was all about Brahms…

Fascinating experiment in Columbus, Ohio. More should try it.

Axel Köhler has quit as intendant of Halle Opera after having 3 million Euros slashed from his purse and being ordered to cut 113 jobs. Here’s his letter.

Peter McGillivray is undergoing surgery today after a freak accident during a performance of Boheme at Manitoba Opera. Here’s his account:

For the benefit of those in more easterly time zones, a short note to let you know that I’m in hospital in Winnipeg this morning awaiting orthopaedic surgery to reattach my tendon to my kneecap. It was…an eventful performance of La Boheme last night.

Standing on top of a table after beating Giles near senseless with a baguette, I stepped down onto a rickety chair which promptly shattered and I fell with my full weight on my knee. Helped off the stage by our lovely ASM, Kathryn, my dazzling colleagues were still able to finish the show with poise & inspired improvisation.

Thanks to everyone at Manitoba Opera for taking care of me both before and after getting to hospital. Now I’m on standby for surgery, and am hoping to walk out of here later today if all goes well. Please send good thoughts, prayers & whisky (clear fluids, amiright?)

Arkadiusz Burski has died in Switzerland, where he taught for 20 years and founded the Polmusic agency. Before that, he performed widely in Poland and Italy. The death was announced on his facebook site.

There had been rumours around for a while that all was not well chez Kaufmann. Now he’s confirmed the split on his site:

Margarete Joswig and Jonas Kaufmann would like to communicate hereby that they have separated. 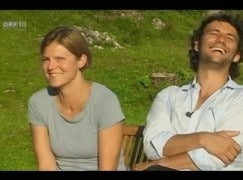 Very sad. Many thought them the perfect pair.

In the past two days, more than 248,200 people from all over the world chose to read stories on Slipped Disc.

Over the past six months, the site has averaged over a million readers a month, and rising. We are amazed and grateful for your interest.

These statistics represent a community above and beyond anything achieved by any other cultural or classical music website. It would be timid and irresponsible on our part to keep this dedicated following to ourselves.

So, in the coming weeks, Slipped Disc will move to a custom-built site with a range of advertising and promotional opportunities. The aim is to build a bigger and better site, employ more people and appear in more languages.

We will keep you posted every step of the way. Today, we finalised our first partnership agreement.

Rebecca Allen, head of Decca, is running in Sunday’s London Marathon. She has told us why before.

Here’s how, and it hurts. Make it worth Becky’s while by giving generously to MacMillan Cancer Support. Match Slipped Disc’s gift. Please.

So my last run in the build up to The 2014 London Marathon has been completed today and my journey is almost at the end, but for millions of people who’s lives have been affected by Cancer, the journey continues.
#
You asked me who has helped me the most in the run up to the London Marathon on Sunday, well the answer is simple – MacMillan Cancer Support. Every time I wanted to give up, every time I injured myself, every mile that hurt and every tear I shed, I just kept reminding myself that I was doing this to raise as much money as I possibly could for this incredible charity.
#
The number of people with cancer is growing every day – I have seen the devastation this awful illness can bring to peoples lives and know that the work the MacMillan nurses do to help families and loved ones through this horrendous time is vital.
#
What’s the worst that can happen between now and Sunday lunchtime – I actually just want to wrap myself up in cotton wool, the thought of getting injured in some freak accident in the next few days is frightening! All those weeks of training & glasses of wine missed. Looking on the positive side though, this week is about loading up with carbs – what’s not to like!
#
Have I changed my music along the way? Absolutely! In the last 3 weeks before you do the final race you are supposed to taper your training. This means you run less and rest more which gives your body chance to repair before the big day. The music I’ve listened to on these shorter runs has definitely been more laid back and more lyric focussed – be it Kacey Musgrave’s ‘Silver Lining’, Emeli Sande’s ‘Mountains’ or Stanford’s ‘The Bluebird’. The amount of music I have listened to over the last 6 months has been phenomenal and I have discovered albums & artists that I had forgotten I loved.
I would like to dedicate this race to my Auntie Rachel and close family friend Mandy Patterson – still loved & missed every day.

The 2014 award, worth 6.9 million Swedish krona, has gone to a woman-averse orch the diva used to admire. Not the most sensitive of selections.

Sajid Javid, 44, is a former V-P at Chase Manhattan and MD at Deutsche Bank. He lists no cultural interests. Lot to learn.

He replaces Maria Miller, brought down by expenses confusion and bare-faced arrogance.