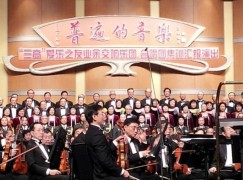 As we reported yesterday, the outgoing Michael Kaiser has given his old pal the parting gift of a new contract.

“For the past four seasons, Maestro Eschenbach has elevated the stature of the National Symphony Orchestra and the Kennedy Center,” Kaiser said in a press statement. “I am pleased this relationship will continue for an additional two seasons.”

Were the musicians asked for a view? Of course not.

Anne Midgette in the Washington Post is determinedly sceptical. Kaiser ends his career on a faltering note.