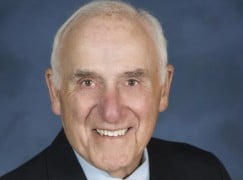 The jury’s out on Philip Glass’s next opera

He has composed Frank Kafka’s The Trial to a libretto by Christopher Hampton. Press release below.

March 31, 2014
MUSIC THEATRE WALES  TO PRESENT BRAND NEW OPERA BY PHILIP GLASS
THE TRIAL –
Based on the novel by Franz Kafka
Libretto by Christopher Hampton
WORLD PREMIERE:
Linbury Theatre, Royal Opera House, London
Friday October 10, 2014
Tour: October 10 – November 10, 2014
Six London performances & touring to venues in Wales & England
Music Theatre Wales will present the World Premiere production of a new opera by the American composer Philip Glass.  The Trial, based on the novel by Franz Kafka, and with a libretto by the playwright and screenwriter Christopher Hampton, will receive its World Premiere at the Linbury Theatre of the Royal Opera House on October 10, 2014, followed by a further five London performances and a national tour of Wales and England in October and November.
First published in 1925 Kafka’s The Trial  tells the nightmare tale of Josef K, a respectable bank employee who is suddenly arrested and forced to defend his innocence against a charge for a crime about which he knows, and is told, nothing. It is probably Kafka’s best known work – a prophetic vision of the excesses of modern bureaucracy.
The Trial is a  co-commission and co-production with the Royal Opera House, Theater Magdeburg, Germany and Scottish Opera.  It has a cast of eight singers and is written for an ensemble of 12 players.  The opera will be directed by Michael McCarthy, with design is by Simon Banham and lighting by Ace McCarron. Michael Rafferty directs the Music Theatre Wales Ensemble.
The cast is led by much-garlanded young baritone Johnny Herford as the opera’s protagonist, Josef K, and soprano Amanda Forbes as Fraülein Bürstner – greatly admired for her performance as The Duchess in MTW’s production of Sciarrino’s The Killing Flower in 2013. Other roles are played by Rowan Hellier (mezzo), Paul Curievici (tenor), Michael Bennett (tenor), Gwion Thomas (baritone), Nicholas Folwell (bass-baritone) and Michael Druiett (bass).

« ‘Women conductors? It’s not getting any better, only worse’