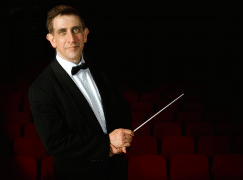 The press release is excessively puffy, but this may be a first. Has any Aussie before Nick ever been a GMD in Germany?

(Saarländisches Staatstheater), commencing with the 2014/15 season.

General Manager Dagmar Schlingmann has succeeded in engaging Nicholas Milton to be the new music director of the Saarland State Theatre. The Australian conductor will lead the Saarland State Orchestra from the summer of 2014. Nicholas Milton has established an outstanding international reputation for his charismatic stage presence and thrilling interpretations of an extensive repertoire spanning both concert and opera. Renowned for his dynamic conducting style, energy, and compelling musical integrity, the immediacy of Milton’s rapport with musicians continues to captivate orchestras and audiences alike.

“This is an exhilarating house with a proud and distinguished tradition, and one that I feel immensely proud to join as General Music Director and Chief Conductor (Generalmusikdirektor). In addition to its world-class orchestra, the singer ensemble is exquisite – and I am extremely excited at the prospect of the dazzling operatic and concert presentations that lie before us in the years ahead”, said Nicholas Milton on his position in Saarbrücken.

Saarland’s Culture Minister, Ulrich Commerçon welcomed the decision in favour of Milton. “The State Theatre of Saarland underwent a rigorous and comprehensive international search process. At the conclusion, it was absolutely convincing that Milton was the clear favourite from the more than 100 finalists for the position. He was selected as the preferred candidate with the overwhelming support of the musicians and singers, and the appointment was unanimously confirmed by the Board. I am delighted that we have been successful in engaging such a highly respected and experienced conductor to be the artistic director of the State Orchestra. With this appointment, the artistic direction team of Dagmar Schlingmann for the next years is now complete.”

“Nicholas Milton is an extremely passionate artist, who lives and breathes music. All of us were instantly impressed by his energy”, said General Manager Dagmar Schlingmann “Along with all of the experience he has gained as General Music Director in Jena, as Chief Conductor in Canberra, and as a guest conductor at major German theatres, he is also incredibly open, communicative and involved. He will profoundly shape the theatre and intends to work intensely on the profile of our concert activity, and that strongly appeals to me”, added Dagmar Schlingmann.

After pleasant and speedy negotiations, a contract for four years until 2018 was agreed upon, reported the Business and Commercial Director Dr. Matthias Almstedt. Preparation and planning for the new season commences immediately, even though Milton’s next commitments lie with guest engagements in Switzerland, Australia and, from March, a series of performances at the Komische Opera in Berlin. Opera Director Brigitte Heusinger added: “Already the collaboration with Nicholas Milton is extremely inspiring and imbued with confidence and trust, so that we have made extraordinary progress in our planning within a matter of a few days.”

“The State Orchestra of Saarland is an extraordinary and brilliant orchestra – clearly a cultural jewel in this charming and lovely city. I have heard the orchestra in a wide variety of repertoire and have been delighted to enjoy their wonderful stylistic differentiations across the broadest range of musical styles. Our recent work together was absolutely magical and inspiring for me as an artist and as a conductor. The orchestra’s flexibility, range of colour, energy, and inspiration were miraculous. Between orchestra, conductor, singers and chorus, we all felt an immediate and profound musical and spiritual connection and I was amazed and delighted by the astounding artistic integrity I experienced across every level of those performances by each and every person involved in the complicated and wondrous organism that is a thriving opera house, from the lead singers to the hard-working team back stage” said Nicholas Milton.

« An open letter to Gustavo Dudamel on the Venezuela situation

Save JS Bach’s house from becoming a parking lot »