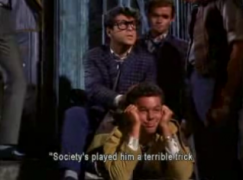 Ask anywhere in Germany for the top Wagner tenor and the odds are that Klaus Florian Vogt will get the popular vote ahead of Jonas Kaufmann. Smaller in voice and physique, much favoured in Bayreuth, Vogt has a universal, trans-generic appeal where Kaufmann’s fans are mostly female opera buffs. The rivalry is, in its clear distinction, as interesting as that of Domingo and Pavarotti, in their day.

Which makes it all the more puzzling that Vogt received his first really hostile reception this weekend, playing Faust in a depressive new production at the Deutsche Oper Berlin. Read the first review here (auf Deutsch).

Has the German fad for booing singers just gone one tenor too far? Or is Berlin a Kaufmann fortress?

When a quartet member breaks her wrist on tour »