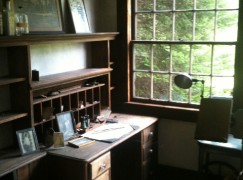 Charles Ives’s studio is saved … and reopened in New York

Eighteen months ago, we campaigned in vain to save the house that Charles Ives built at Redding, Ct., from sale and demolition.

Today, we learn that Ives’s composing studio has been plucked from the rubble – donated by his grandson to the American Academy of Arts and Letters in New York City (Audubon Terrace on Broadway between 155 and 156 Streets). It will open to the public on March 6.

On Thursday, March 6, 2014, the newly recreated Charles Ives Studio and accompanying exhibition will open in the galleries of the American Academy of Arts and Letters in New York City (Audubon Terrace on Broadway between 155 and 156 Streets).

The studio is a faithful replica of the room originally located on the ground floor of the Ives home in Redding, CT, where the renowned American composer Charles Ives worked for the last forty years of his life. It was there, on the studio’s modest upright piano, that Ives composed and finished several of his major works, including Three Places in New England, The Fourth Symphony, The Second Orchestral Set, The Fourth Violin Sonata, and about 40 songs.

In 2012, Charles Ives’s grandson, Charles Ives Tyler, donated the entire contents of the studio to the Academy for permanent exhibition. The studio had been largely untouched since Charles Ives’s death in 1954, and over 3,000 objects were catalogued and restored, including the studio’s furnishings and double doors, to which Ives himself had pinned clippings, photos, and keepsakes. These are now installed in a replica of the studio in the Academy’s third-floor galleries, while an accompanying exhibition explores Ives’s life and work in Redding. It is the Academy’s hope that together these capture the essence of a man whom Leonard Bernstein called, “Our first really great composer…our Washington, Lincoln, and Jefferson of music.”

Henry N. Cobb, the Academy’s President, said, “In recreating the Ives studio and preserving its contents in situ, our goal is to make this important documentary record permanently available to scholars and an interested public.”

The Studio will be open during the Academy’s annual exhibitions and by appointment.