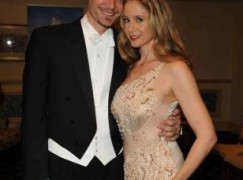 Why English National Opera is losing its music director

Edward Gardner will leave ENO in 18 months time, ‘to take up his new appointment as Chief Conductor of the Bergen Philharmonic Orchestra’. There may be more to this than meets the eye. Bergen is renowned for its red herrings.

Ed was a stunningly young 31 when he took up the baton at a faltering company in 2006, giving his first performances the following year. He has matured in the job and the company has greatly improved. Orchestra and chorus are in good shape and the productions, while variable, have been frequently inspired. So read the press release below and ask why he’s leaving.

First tip: to be in the frame to succeed Andris Nelsons at the City of Birmingham Symphony Orchestra, where Ed is principal guest. Second punt: to succeed Antonio Pappano at Covent Garden. Outside bet: the Met, where Ed and ENO have a close working relationship. Phone the bookies now.

ENO have moved boldly to replace Ed with another Brit, the nearly-man Mark Wigglesworth, 49, whose career has not quite fulfilled its early promise.

English National Opera (ENO) has today (23 January 2014) announced that its highly-acclaimed Music Director Edward Gardner will leave his role at the end of the 2014/15 season to take up his new appointment as Chief Conductor of the Bergen Philharmonic Orchestra. He will be succeeded by Mark Wigglesworth, who takes up the ENO baton in September 2015.

“Ed Gardner has been a phenomenal Music Director, rightly winning plaudits across the board for the outstanding performances of our orchestra and chorus under his leadership. I’d like to thank him for his huge musical contribution to ENO and I look forward to working with him on a number of exciting company projects during 2014 and 2015.  I wish Ed every success with his symphonic work and I’m delighted he’ll be back with us in 2016 as a guest conductor.

“It’s tremendous that I am also able to announce Ed’s successor today. Mark is one of the most outstanding conductors of his generation and I’m thrilled to be working with him. His appointment highlights ENO’s current standing in the international opera world and our ability to attract the very best talent from across the arts and the wider creative industries. He has already had great success with us in recent seasons, conducting acclaimed performances of Katya Kabanova and Parsifal, and his brilliant technique and natural flair for the theatre make him a natural choice to lead the Company.

“I know Mark will make his presence felt and will support our mission to make ENO one of the most theatrically dynamic and musically exciting opera houses in the world.”

He and ENO are no strangers, with Mark having conducted Lady Macbeth of Mtsensk (2001), Così fan tutte (2002 and 2003) Falstaff (2004), Katya Kabanova (2010), and Parsifal (2011, “confidently shaped…masterfully calculated”, The Telegraph) at the London Coliseum. Elsewhere, he has worked with Glyndebourne, Welsh National Opera, Netherlands Opera, La Monnaie in Brussels, Sydney Opera House, the Metropolitan Opera, New York and the Royal Opera House, Covent Garden, where he will be conducting again shortly before taking up his post at ENO.

Speaking of his appointment to ENO from 2015, Mark Wigglesworth said:

“I have worked at ENO often enough to know that talent and experience, professionalism and passion run through the entire company: the orchestra, the chorus, the technical team, and the whole administration. To be part of this family of experts will be inspiring and fulfilling in equal measure.

“The core values of the company are those I hold most dear, music and drama delivered through collegiate brilliance, in a language the public understand; a public whose range and variety make them the most thrilling of all audiences. ENO has been close to my heart for over 30 years and to be part of its future is a privilege that I look forward to immensely.”

Edward Gardner began his tenure at ENO in May 2007 with an outstanding new production of Britten’s Death in Venice. Under his direction, ENO reaffirmed its position as the world’s leading producer of opera by Britten, with Gardner conducting award-winning new productions of Peter Grimes (2009; returns 2014) and 2012’s Olivier-nominated Billy Budd.

Gardner has led some of ENO’s most critically acclaimed productions of core repertoire (Damnation of Faust 2011; Der Rosenkavalier 2008/2012;Wozzeck 2013) and contemporary work (Punch and Judy 2008).

Gardner continues as Music Director for the remainder of the 2013/14 and the 2014/15 seasons, conducting Peter Grimes later this month, the world premiere of Julian Anderson’s Thebans in May, and reprising his creative partnership with Terry Gilliam with a new production of Benvenuto Cellini in June, plus productions throughout the 2014/15 season. And his association with ENO will continue, with an engagement as guest conductor already confirmed for ENO’s 2015/16 season.

Outside ENO, Gardner conducts regularly for the Metropolitan Opera, New York.  He is Principal Guest Conductor of the City of Birmingham Symphony Orchestra and in October 2015 he will take up his new appointment as Chief Conductor of the Bergen Philharmonic Orchestra.   He plans to focus more on symphonic repertoire in future and new orchestra relationships include the Royal Concertgebouw, Czech Philharmonic, Deutsche Symphonie-Orchester Berlin, Leipzig Gewandhaus, Accademia Nazionale di Santa Cecilia and Swedish Radio Symphony.  His London presence will continue with annual appearances at the BBC Proms, concerts with the Philharmonia and BBC Symphony orchestras and regular collaborations with the Guildhall School and Royal Academy.

Speaking of his decision to leave ENO in 2015, Edward Gardner said:

“At ENO I’ve been surrounded by brilliant people creating some of the best opera productions in the world and I will never forget nine seasons of working with such an outstanding orchestra, chorus and music team. Certainly, the next 18 months are looking as exciting and challenging as ever.

“Beyond that, I’m eager to take the opportunity to explore new musical relationships, but I look forward to returning to conduct at ENO in 2016.”

« ‘Super Bowl’s a lot tougher than singing at the Met’