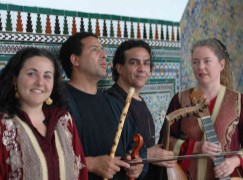 The truth slowly emerges about the smashed-up flutes at JFK

We have been in touch again with Boujemaa Razgui, the virtuoso player and instrument maker whose 11 neys were seized and destroyed by Customs at JFK Airport, as reported exclusively on Slipped Disc. Boujemaa has since been talking to the Globe and Mail, CNN and other media. Notwithstanding language difficulties, the facts of the case are now abundantly clear.

The case in which Boujemaa carried his instruments and some bamboos for making new ones, was seized by Customs at JFK Airport. It was delivered empty to his home, he assures us, with a slip of paper saying all of the contents had been destroyed.

A spokesman for New York Customs initially admitted that they destroyed bamboos, but not instruments. Officials at U.S. Customs and Border Protection later told Foreign Policy report that they had identified the instruments as agricultural products that risked introducing “exotic plant pathogens” to the US.

Boujemaa told the Globe and Mail: ‘I’ve been doing this for 26 years – travelling with my instruments and material to make instruments – and nothing like this has ever happened …They never gave me an opportunity to explain.’

An eminent ensemble director and colleague of Boujemaa’s told us last night: ‘To put the best possible light on the NY Customs assertion: The agents conceivably did not KNOW that they were destroying musical instruments; they thought that the items were just sticks of wood. This may eventually be their defense.’

Boujemaa told CNN: ‘I need something to work with, it doesn’t make sense to me that they were just cut off, I have a big heart for this… Right now I don’t have a job; I don’t know what to do… I need my materials to make my living.’

« Minnesota musicians beg city to take over the empty hall