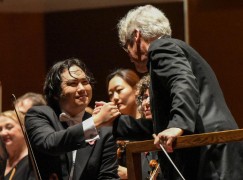 We reported at the weekend that Yosuke Kawasaki, concertmaster of the National Arts Center orchestra in Ottawa, had his violin and bows seized by Customs on entering Canada and was facing a C$120,000 fine to release them.

The seizure took place in 2012 and the violin and three bows were released several weeks later, after Yosuke made an interim payment of $20,000, plus tax, for their release. But the full fine is still hanging over his head.

The matter has now come to light as Yosuke is taking it to court, claiming that Customs wrongfully seized his instruments.

CBS has the court documents here. This could be an important test case for all musicians seeking to enter Canada.

Met parts with publisher after less than three months »