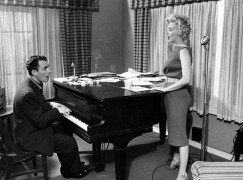 The outgoing Berlin Philharmonic conductor has been appointed to the Order of Merit in Britain’s New Year’s Honours List. The OM is restricted to 24 living individuals at any given time. Rattle is the first musician of his generation to be included.

Other music honorees include a Companion of Honour (CH) to the composer Peter Maxwell Davies, an OBE to the singer Katherine Jenkins and CBEs to the pianist Stephen Hough and the dancer Carlos Acosta.

Jenkins said: ‘To accept such an award after only a decade of service to music and charity, comes as a wonderful surprise. I share this award with the charitable bodies I am so privileged to work with, especially to those brave service men and women who risk so much for us all on a daily basis.’

« Sibelius and the Freemasons: who else was in?

Outrage at JFK as Customs men smash a musician’s instruments »