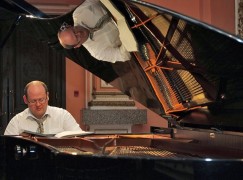 The deprived Paraguay kids who make their own instruments out of trash were featured on CBS 60 Minutes this Sunday. Press release below.

Scottsdale, Ariz. (November 14, 2013) – Landfill Harmonic, a documentary that sheds light on the transformative power of music, will be featured on 60 Minutes on November 17. Landfill Harmonic tells the story of “The Recycled Orchestra,” which consists of a group of children from a shantytown called Cateura in Paraguay, who play musical instruments made from trash.

“Being born in Asuncion, Paraguay, I dreamt of the opportunity to help my country and bring awareness to issues that revolve around children and women,” said Amarilla. “The documentary is a major step to garner support for The Recycled Orchestra and inspire general audiences to recycle objects, restore their livelihoods and provide hope for younger generations.”

The documentary tells the story of a humble garbage picker and shows his ingenuity to create instruments out of recycled materials. The documentary also follows a few children, the music teacher and the luthier who creates the instruments. This story gives the audience insights into not just the history of how The Recycled Orchestra came to be, but the incredible and unexpected journey the orchestra has experienced. The film takes the audience on a three-year journey which includes the orchestra’s first concert abroad in Brazil.

The project expanded in early 2013 when Amarilla and her team launched a Kickstarter Campaign to secure funds to complete the film. The campaign garnered nearly 5,000 backers and more than $200,000 in less than two months.

Landfill Harmonic strives to educate audiences on recycling and sustainability topics through social media and partnerships with environmental organizations.

For more information on the Landfill Harmonic and executive producer, Amarilla be sure to check out 60 minutes Overtime, dubbed as the web show that picks up where the television show leaves off.

« Just in: Netrebko is rehearsing Trovatore without a tenor

German media boss tells 160 conductors: I’m not listening to you »