Criticising the critics 6: In breach of the Second Commandment

It never fails to amaze me that, nearly 60 years after Stalin’s death and 20 after Karajan’s, there are still music critics around who lavish conductors with the kind of superhuman praise demanded by the great dictators.

The objects of their admiration are, admittedly, fewer than heretofore but the hyperbole remains the same. It is founded on the assumption that a conductor is all-knowing, all-wise and all-loving. The most prevalent object of this false worship is Claudio Abbado, who has acquired something of the aura of a latterday saint (if not higher) since he survived a bout with stomach cancer. Abbado is a man like any other, faults and all. But you’d hardly believe it from his reviews.

A CD review in Friday’s London Times caught my eye. The paper is not online, so I shall not name the offending critic. The works on question are the violin concertos of Berg and Beethoven, played by Isabelle Faust in Bologna with the Orchestra Mozart guided by their artistic director Claudio Abbado, a great conductor whose ability to reach a work’s soul seems only to have increased during his ten years of battling stomach cancer (you can see where this is leading).

The critic continues: Time and again the ear is brought back to the burnished clarity of Abbado’s textures.

If they were so clear, they should be unobtrusive.

Each ghostly strand in the music’s web is picked out in tender pain.

And it’s Abbado we must thank…

Does he mean God?

The luminous sound of Abbado’s orchestra, a continuing glory

a phrase taken whole from the lexicon of Karajan hagiolatry

infuses the concerto with a real sense of joy.

Either the composer wrote the joy, or it’s not there. It cannot be infused.

Faust is a wonder on this disc, but Abbado is even more so.

Oh, give over. He’s a conductor, doing his job and edited for the record. Nothing miraculous in that. 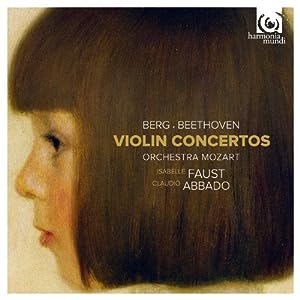 Abbado, unlike Karajan, never required a diet of hyperbole. So why write, or publish, such guff?

What would Bartok say about Hungary today? »