Heartbreaking news: Thomas Quasthoff confirms that he has sung for the last time

I’ve just talked to Tommy Quasthoff and had confirmation of his very sad decision to give up singing, for persistent health reasons, at the age of 52.

‘But I am totally happy with it!!!!” says Tommy, who is one of the sweetest natured men alive. 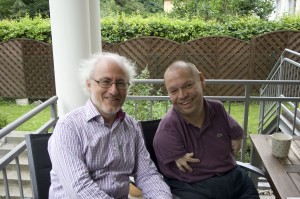 Tommy told his friend and agent, Helga Machreich-Unterzaucher, that he had always played in the Champions League and was not willing to do anything that was below his phenomenally high standard. I, and all his friends and admirers, will greatly respect that decision.

He is, however, not going to disappear. He will contine to serve as a judge on the Wigmore Hall singing competition and to present his live interviews in a small Berlin concert hall. He is full of life and eager to share it.

Here’s a press statement in English that is just going out from the agency Press Release.

Quasthoff, who was born with terrible disabilities, has been described by Dietrich Fischer-Dieskau as the greatest male lieder singer of our time.

Here’s an archived piece I wrote about him 11 years ago.

Here’s the man at his best.

And here’s an extract from something I wrote after spending an afternoon with him last summer.

He is just 1.34 metres tall and has very short arms, the consequence of a drug called Thalidomide that his mother was prescribed during pregnancy. His first years were spent in hospital among cerebral palsy sufferers and he was not expected to live very long. Only the support of a close family and his own innate humour and stubbornness enabled him to transcend his circumstances and find his voice in art. ‘I’m a normal person, only shorter,’ he will tell you, a huge grin stretched across his face.

Listen to the full conversation here.

The many sides of Thomas Quasthoff »