Criticising the critics 2: how to review a bling concert

It’s never easy to write about a musical performance where the celebrity value is higher than the aesthetic pedigree. Zachary Woolfe drew the short straw and got sent by the NY Times to a Carnegie Hall recital by Lola Astanova, a catwalk model with influential friends.

His review strike a tone ofexemplary detachment and three central paragraphs describe, with clinical precision, the quandary innate to such occasions. These pars come close to a masterclass in criticism: 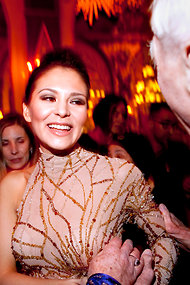 Many pianists have succeeded with an arsenal of broad gestures, though Ms. Astanova’s are more exaggerated than most. She seems to be trying to evoke the grandiose, generous spirit of 19th-century pianism, with its heart-on-sleeve emotionalism and aching soulfulness, its valorization of feeling over cool precision.

Ms. Astanova does indeed love to make a big sound, even at the expense of some murkiness of tone. But her taste for drama and her extreme physical abandon end up emphasizing that there isn’t a great deal of emotion in her playing.

Her reading of the Chopin sonata was telling. While her phrasing wasn’t rigid — she used ample rubato — there was a faceless quality to passages that must sing, like the lyrical second theme of the first movement and the similarly calm central section of the second. Ms. Astanova’s third-movement “Funeral March” tried too hard for misty moodiness, lacking the intensity of a relentless pulse.

« This is not a premiere