I have been sent these drawings by Gregor Dekleva, of the International Montessori Preschool Vienna. They were made by children aged three to six years old, to the theme, “The man who made music!”.

A while back, I warned you that Liszt’s B-minor sonata had been transcribed for solo violin and was being played by Giora Schmidt at Ravinia. This Sunday, to mark the 200th birthday of the restless Abbé, the European Broadcasting Union will be putting on concerts and recitals from many of the cities he visited, from Dublin to Bucharest.

However, here’s one event I’ve heard about from Bucharest – and do feel free to add more:

From Romania, where Franz Liszt toured in 1846/47, the member stations broadcast a concert by pianist Luiza Borac live from the Mihail Jora Radio Concert Hall, Bucharest.

First it was the London Symphony Orchestra restoring the City gem of St Luke’s as a rehearsal and education centre, a place of infinite possibilities for interaction and outreach with diverse communities (as well as black-tie dinners).

Manchester’s Hallé Orchestra is delighted to announce an award of £702,000 from Viridor Credits Environmental Company, to support the redevelopment of St. Peter’s Church in Ancoats. The award was announced publicly at a special event today (Friday 14 October) in Taunton to commemorate the tenth anniversary of Viridor Credits.

News of the award came just days before the Hallé received confirmation of a grant of £150,000 from the Garfield Weston Foundation.

This means that work can begin on the transformation of St. Peter’s into a new rehearsal base for the Hallé, and a home for the Orchestra’s education and community programmes. The new facility, which will preserve the exterior of the building itself, will also act as a base for the Hallé Choir, Hallé Youth Orchestra, Youth Choir and Children’s Choir. The Hallé are being advised on the project by Manchester law firm George Davies.

The Hallé Choir was founded by Sir Charles Hallé (alongside the Orchestra) in 1858. St. Peter’s will offer, for the first time in the Choir’s history, the chance to have a permanent rehearsal venue. The three youth ensembles rank amongst the Hallé’s proudest achievements of recent years. They offer talented young people from Manchester and the North West the chance to develop their skills by working alongside professional musicians, conductors and choral directors.

John Summers, Chief Executive of the Hallé, said: “This is brilliant news, both for the Hallé and the sleeping beauty that is Ancoats.  We are delighted to be able to focus our education and community work in an area which played such a central role in Manchester’s emergence as a city of world significance. We are hugely grateful to both Viridor Credits and the Garfield Weston Foundation for giving us such an excellent start to our fundraising campaign.”

Lisa Nelson, general manager of Viridor Credits, said: “We were inundated with entries for our tenth Anniversary Commemorative Awards but the Hallé really stood out to us. Not only will it help to restore the impressive St. Peter’s Church for everyone to enjoy, but it will also help to provide valuable space for the prestigious Hallé Orchestra, helping to regenerate this area of Manchester.”

The former St. Peter’s Church is located in Ancoats, a part of Manchester that is widely regarded as the world’s first industrial suburb and an historic feature of the city’s heritage. The Homes and Communities Agency (HCA) recently inherited the Ancoats Estate from the North West Regional Development Agency.

Pictures have just come online of the Japanese conductor Seiji Ozawa receiving the Premium Imperiale culture award, sometimes referred to as the Japanese Nobel. He shared it with Anish Kapoor, Ricardo Legorreta, Bill Viola and (below) the British actress Judi Dench. 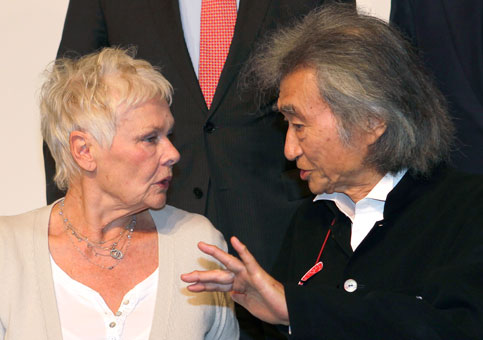 Ozawa’s August comeback from cancer treatment ended after one performance of Bartok’s Bluebeard’s Castle and the cancellation of a China tour.