The audience that leaps to its feet

The tour reporter on the Israel Philharmonic Orchestra website reports:

‘I have never seen a cheering audience jump to its feet quicker than the audience at the Gergiev Festival in Rotterdam.’

I donlt want to dampen his enthusiasm, but that’s the Dutch for you. They build concert halls with very little legroom for seated spectators and then breed children who are quarter of a metre taller than the rest of us.

At the end of a concert – especially in the Concertgebouw – the audience leaps to its feet to avoid deep vein thrombosis (DVT).

I’ve seen it many times. Does this happen anywhere else? 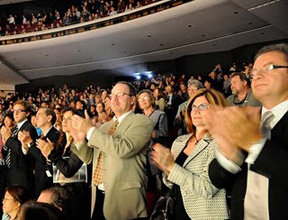