Exclusive: Alberto Vilar's appeal is being heard. He deserves to go free.

Alberto Vilar, the financier who gave more money to opera than any other man or bank, has presented his appeal against conviction for consiracy to commmit fraud, for which he is serving a nine-year sentence at Fort Dix, New Jersey.

A source close to the defence tells me that the appeal argues there was no fraud, nor any conspiracy.

The jury was not told that there was twice enough money left in his company Amerindo’s account to pay the claims. It was revealed only at the sentencing hearing that $43 million was available for restitution against claims of $22 million.

‘Alberto and his partner Gary Tanaka never denied they owed this money,’ says my source. ‘When the government shut down Amerindo in 2005, Bear Stearns froze their accounts.’ That money is now at JBMorgan Chase, the bank that took over the collapsed Bear Stearns in 2008.

Alberto’s appeal was submitted yesterday. A separate status conference dealing with the money matter will be held tomorrow.

Alberto, who is 70, should not be kept in jail at a time when none of the collapsed US bankers, who committed far greater conspiracies, has been prosecuted. He should be allowed to pay the claims and walk free, while continuing to fight to clear his name – a name that the Metropolitan Opera, which received  gift of $30 million, lost no time in removing from its wall.

Setting Alberto free would give payback to the claimants, and justice to him.

But this is America, where justice is blind and a man can be sent to execution, despite prosecution witnesses revoking their testimony.

I hope Alberto has better luck, and better lawyers. 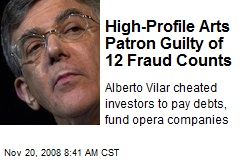