After 47 years, Philadelphia Orchestra violinist hangs up his bow

At the end of their BBC Proms concert, conductor Charles Dutoit presented his bouquet to a member of the second violins, buried in the belly of the orchestra. Louis Lanza, 75, had decided to retire after almost half a century in the band, putting himself automatically into slipped disc‘s hall of fame as one of the longest serving orchestral players of all time.

Lanza was part of a Philly musical dynasty. His brother, Joe, joined the orchestra in 1958 and played until his death five years ago. “Joe was a very devoted musician,” said Louis Lanza. “He had accumulated 46 weeks of sick leave, but never took off unless he had a high fever. He loved playing, always taking music home to be prepared for rehearsal, and never took time off, even to see a doctor.” Several other family members worked as professional musicians. 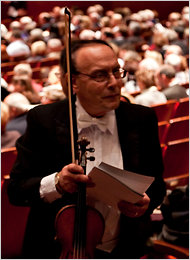 A native Philadelphian, Louis Lanza studied with his uncle, Michael Pascuccio, and Frank Costanzo.  While in high school Mr. Lanza received a scholarship to attend the Philadelphia Conservatory of Music, which later merged into the University of the Arts.  After graduating from high school, he received a four-year Board of Education Scholarship and entered the Juilliard School where he studied under Edouard Dethier, and took chamber music classes from Hans Lety, Robert Hoff, and Dorothy DeLay.

Following graduation from Juilliard, Mr. Lanza enlisted and served three years in the U.S. Army Band in Washington, D.C., recording many radio broadcasts with popular singer Steve Lawrence.  After being honorably discharged from the Army, Mr. Lanza played for three years in the first violin section of the National Symphony and in 1964 was reunited with his late brother, Joseph, in the violin section of The Philadelphia Orchestra.  For many years, Mr. Lanza was principal second violin of the Reading Symphony, the Trenton Symphony, and the Amerita Chamber Orchestra.

Mr. Lanza made frequent solo appearances with his late wife, Joan Trombetta Lanza, a pianist and singer.  They later formed Lanza Family Presents, giving concerts in schools and elsewhere featuring Joan Lanza (piano and voice); their son, Lou, a popular and jazz singer (violin and voice); and daughter, Cara, who has a Ph.D. in clinical psychology (piano and voice).

« The day The Sun got it right

Call for Italian ban on the Israel Philharmonic Orchestra »