The agent who turned down Pavarotti

The influential Italian agent Angelo Gabrielli, artistic director of StageDoor Artists Management, has sent me his views on the row sparked by Gidon Kremer over the exploitation of young artists. Among other observations, he recalls the Milan manager who sent Luciano Pavarotti away for being unready and the advice Mirella Freni gave him when casting young artists: never take a fee if it risks the voice. Here’s Angelo’s letter:

I would like to insert another point of view to this discussion especially as an artists manager, a category that has been called upon and not in a positive way.

Having been in this business for more than 20 years, I would suggest that none of the scenarios that emerged in this discussion is consistently true.

In my opinion, the only certainty is that most of young artists that are pushed into the limelight too early disappear within a few years or are forced to a “back-water” career:  on top of the world in their twenties, at the bottom of the pecking order or teaching in conservatoires in their forties. Of course there are notable exceptions: conductors like Riccardo Muti or Riccardo Chailly started conducting prestigious orchestras when still very young, and continued to keep a top-notch standard until today. But how many artists of their same age peaked too early?

It would be quite interesting to skim through past seasons of La Scala and other major opera houses in order to verify how many – among the artists that have made their debut before 25-30 (or after few years of professional training) – are still present in the same big venues.

I distinctly remember the parents of a young conductor – young and of great promise – asking me if it was appropriate that their son read Mickey Mouse comics during the train trip from his home to the concert venue. It might have been a way to relax or perhaps an excuse to remain a child a little long, but I can’t help wondering if this is the type of literature that still accompanies him in his spare time before concerts…

Education, field experience, the ability to control nervous tension, the environment where the artist has grown up – all play a role in the (longer or shorter) journey towards the goals a young talent aims to reach.

Antonio Pappano has been breathing music since his childhood: his father, who used to be a singing teacher, gave him the opportunity to accompany his pupils on the piano during singing lessons and the young Maestro has surely benefited from this experience. The same can be said of Riccardo Chailly, who, from an early age, was ever present at La Scala at the side of his father Luciano, getting acquainted with the work of the greatest conductors of that era.

As a student of statistics, I had the opportunity to read a research about the behavior of people who win large amounts of money in lotteries. A large percentage of the winners who came from lower middle classes and with a low level of education happen to dissipate their prize money in a few years or get into debt for lack of previous preparation in dealing with this kind of wealth.

This should be a warning for all those who suddenly gain fame and international recognition. Young artists with little money or limited scholarship that happen to earn huge amounts all of a sudden, can easily lose control of their spending and then be forced to accept work that is useless or dangerous for their career in order to keep up with their new life standards. We all know that a good performance can bring other gigs, while performing unprepared or being challenged in front of a large audience can throw away years of study and sacrifices, or even compromise an already solid career.

The great Mirella Freni gave me the most important advice to pass on to an artist: “Dear Angelo, please remind every singer that each engagement they accept must be accomplished in the best possible way and it is always wise to refuse what is not suitable for their vocal or stage abilities regardless of the fee or the prestige of the engagement. If you truly believe in an artist, you have to evaluate his career in the long term, without considering just the immediate payback”.

Artist managers today are often conditioned by the pressing requests of the theaters, perennially in search of novelties, and it happens all too often that a young artist prefers to trust unscrupulous agents who are all too happy to go with any risky demand of the artistic directors.

Luciano Pavarotti told me that after an audition for the famous Liduino Bonari (a Milanese agent whom almost every artist engaged at La Scala had to pass through) he was advised to come back again in the future, because he was still too immature to make his debut at La Scala. I am sure that today a young tenor with the same qualities of the twenty-year old Pavarotti would be immediately cast by most opera houses all over the world. 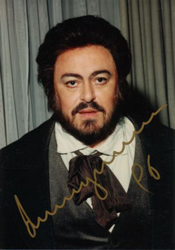 With the audience today less qualified and the “Loggioni” crowded by harsh and highly competent melomaniacs no longer exercising the same fear factor, the need for a conscientious application from all involved in the business of music is essential if we are to preserve our cultural heritage. Young talents are welcome: we should not bridle the career of people who are fully entitled to have a big one (that said, Gavazzeni once told me that a conductor should not get on the podium before having learned at least 50 operas…). However, the quest for the next new thing does not address our real need: that of creating a new generation of highly qualified and impeccable musicians such as Patanè or Devinu, who, while not reaching the heights of a Callas, a Muti or Abbado (you can’t train to be a genius), ensured a consistently high level of performance that allowed the art form to preserve its quality.

Closer to home, the Italian situation is particularly problematic in this regard and a first step must be the reform of Italian Conservatoires. I also think that music experts – not politicians – should lead musical institutions. What politicians should do is allocate funds for those institutions that show the ability to produce and diffuse culture locally or internationally.  A small festival or theater is not necessarily doomed to stop growing in the same way that well established institutions should not necessarily feel on the safe in their long held position, if they are not able to live up to their historical reputation. A healthy competition for high quality and prestige should be a goal for everyone, whether an artist or an institution. Nevertheless, despite striving for the best, we should also be aware that not every effort will lead to success, and fortunately so: were perfection a reachable goal, it would mean the death not only of music, but of the entire humankind.

(seen below with Freni and Pavarotti)

Gardening tips from a great composer »