The Norwegian prime minister, Jens Stoltenberg, who did so much to bring the nation together in mutual self-respect after the appalling massacre last month, took time out on Friday to open the Oslo Chamber Music Festival, directed by violinist Arve Tellefsen.

Here’s my correspondent’s report from an overwhelming, emotional encounter: 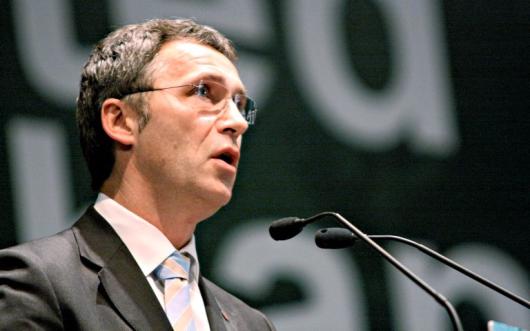 The main speaker at the opening concert was our prime minister, Jens Stoltenberg. He spoke warmly of how music helps and consoles us in hard times, and gives us moments of rest. When he entered the podium of the University Aula, newly refurbished, everyone just got to their feet as if planned. The ovations went on and on. The participating artists were all given one rose, and the six young women who ended the concert with Brahms’ Sextet, suddenly decided to throw their roses at Mr. Stoltenberg who sat in the front row.

That was a grand moment – the audience went wild, Stoltenberg’s eyes were filled with tears. It was such a Norwegian moment! He had only one (visible) security person with him. Afterwards everyone was milling outside in the university place, prime minister and his wife, hand in hand among us, going from group to group hugging everyone (I got two hugs!), talking at some length with everyone who wanted to. Then we all walked across the square, past the National Theatre across to Hotel Continental to the reception there. The PM met applause everywhere, foreigners were gaping at this show of openness. Then the PM had his first glass of wine and his first hour of relaxation since July 22.

All in the name of music and art – the Aula has marvelous murals of Edvard Munch.