Trouble here among the tutus.

Rumours of widespread cocaine abuse have wafted for more than a year around the Danish Royal Ballet, whose director is Nicholas Hübbe, once a star of New York City Ballet. 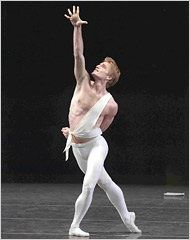 The company commissioned an independent investigation from the National Centre for Competence. More than half the RB dancers were interviewed.

The results, leaked to the Jyllands-Posten newspaper, are shocking – not just for confirming the original allegations but for exposing a climate of mistrust and managerial laxity. More than 20 dancers said they are looking to get out.

And the Royal Ballet’s response? “It is true that we have had an outside consultant employed by the Royal Ballet. He – no longer associated with the theater – has written an internal report with a series of allegations of drug abuse and cooperation problems.These are unsubstantiated and cannot be verified.”

So that’s all right then.

Local jokers are suggesting that Danish Royal Opera is planning a sympathy fund-raiser of Shostakovich’s opera, The Nose.

« Another plucky one gone

Just in: Late Russian maestro to receive grave of honour in Vienna »