I have received the following message from Mr Masur’s office:

“Due to an ongoing medical treatment since May 2011, resulting in cancellations in Paris, Israel, Leipzig and St. Petersburg, Maestro Kurt Masur has been urged by his doctors not to work or travel and to take an extensive break this summer to pursue this necessary treatment.

Maestro Masur regrets not to be able to come to Brazil this August in such an important moment, he has the utmost respect for Roberto Minczuk and sends his love to the OSB. He looks forward to returning in June 2012 to continue his collaboration with the OSB and Maestro Minczuk  for concerts and masterclasses.”

Not my description – it’s what Dietrich Fischer-Dieskau called him in a Lebrecht Interview four years ago.

Who did he have in mind? Thomas Quasthoff. 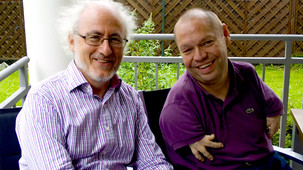 The diminutive baritone, bodily disabled but spiritually immense, talks on next Monday’s Lebrecht Interview about music and life.

In the past year he has suffered a double loss – his brother died and his marriage foundered. Against this backdrop he has been thinking harder than ever about the emotions he conveys in the act of singing.

We talked for two hours, one of the most intense conversations in the series.

It’s on Monday at 10pm here, and streamed online for a week. Don’t miss it.

Claudi Solti’s debut went down a treat in St Pete, according to Moscow Times.

Sir Georg’s girl directed Britten’s Midsummer Night’s Dream with Willard White as Bottom and Valery Gergiev conducting. I’m not sure it was the Queen’s English with all the dipthongs sitting easily in Russian mouths, but it was very brave of them to try.

And good to see Claudia clear the first career hurdle without mishap.

Simon Stockhausen is co-writing a contemporary Wagner tribute opera for the  Neuköllner Oper. The multilinear plot goes something like this:  Bolivian journalist interviews capitalist crook-turned-philanthropist. In Naples, a 14 year-old immigrant is robbed of his ornaments. In Bombay, a temple prostitute sings.

This is supposed to represent Rheingold. It might take a leap of  imagination on the audience’s part.

The Vienna Philharmonic are making him an honorary member after Muti announced he’d never conduct another opera in Salzburg. Apparently. Actually, he confided his plans a couple of months back to Andrew Patner in Chicago.

Slipped Disc does not like to fall behind the story. So we’ve been shopping hard and this is what we’re putting beside the birthday cake:

1 The earlobes of the last two producers to cancel his record contracts (they freely donated the lobes in preference to other parts).

3 Wiped VHS copy of  The Philadelphia Story (he won’t want to remember that place).

4 Framed photograph of Chicago in winter:

Tanti auguri, Maestro! One of the few at your exalted level who have kept a sense of perspective and humour.

The British advertising watchdog has banned airbrushed photographs of aging models for giving the false impression that certain creams can make any woman look 28. Julia Roberts and Christie Turlington (below) are among those being taken down.

Forces in the music industry are proposing that the same principle should be applied to recordings of elderly, talentless and half-trained artists whose recordings are pieced together with microsurgery to cover the false notes and dullness. ‘So many artists and OCD producers cannot make a
classical recording in less than five hundred takes and a thousand edits – then denoising, then covering in phoney reverberation,’ laments one leading producer.

No names, though we all know who they are. But maybe this should be one of Placido Domingo’s first campaigns in his new glove-puppet role as president of IFPI, the industry’s anti-theft and fraud organisation. 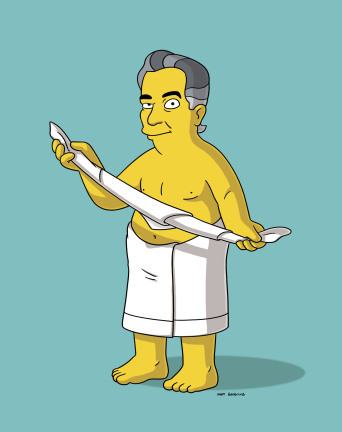 PD as The Home of Seville (c) Simpsons

It’s Gil Bernal, famed for Duane Eddy’s Rebel Rouser and much else. He was 80.

The whole generation are on the way out. Earlier, we lost Frank Foster.

Peter Dobrin, a determined reporter who’s following the unwinding of the Philadelphia Orchestra, has come up with a shocking stat.

The board has spent – wait for it – $2.4 million so far – on outside consultants who are taking it through the Chapter 11 bankruptcy proceedings.

The chief aim of the bankruptcy is to evade pension obligations to players and staff.

The entire exercise stinks to high heaven, and there’s no assurance that the orchestra will survive when it’s over. Deborah Borda, in the Lebrecht Interview this week, made the very strong point that Philly and its board have been stacking up problems for years. “The Board of Directors – these numbers were not a secret – people knew about them – they didn’t take more decisive action years ago.  The management agreed to pension packages that no other orchestra in the country could afford,” she said.  The problems won’t be solved overnight, or by means of oleaginous legal and financial consultants.

The news is that the Festival wants to pay homage to Leo Kirch, who went bust in the past decade and died to weeks ago, aged 88. In his pomp, he created a classical video company called Unitel with Herbert von Karajan in 1964. They fell out, fell in again, fell out, but the work was high quality and Kirch was a fan. he secured rights to the Boulez-Chereau centennial Ring at Bayreuth and worked closely with Leonard Bernstein. A lot of money flowed from his bank account to premier orchestras and conductors.

The Vienna Philharmonic and Pierre Boulez will pay tribute.

Frank Foster, the saxophonist who did arrangements for Sinatra and doubled with flautist Frank Wess in a number called Two Franks, is gone at 82.

His best-known number was Shiny Stockings. Hear it here. Obit here. More than anyone, he shaped the Count Basie sound.

Players in the Barcelona Symphony Orchestra have defied senior management to sound out their support for jeopardised Dutch arts. We’re all in this together, they day. The Catalan orchestra has taken a 30% cut and cannot afford to replace sick or absent musicians.

Here’s a moving letter from the principal bassoon, Silvia Coricelli:

I am happy to send you our contribution to the “Soldier of Orange”
project: http://www.youtube.com/watch?v=6X_HrEbe4Gw

I learnt about this campaign through your blog (and Facebook) about a
month ago and proposed it to my orchestra. Pablo González, our Music
Director, and the Orchestra Manager were very enthusiastic, but the
higher ranks said no. The orchestra committee kept insisting and last
Friday the General Director agreed to let us do it.

Monday we were doing a recording and was our last day of work of this
season, so we had to get it all organized over the weekend. Maestro
González wasn’t in town, we asked the conductor doing the recording,
Antoni Ros Marbà, he agreed and so did the recording engineer.

Several of our Spanish musicians have studied in Holland hence this
project was very close to their hearts. The harp player wanted to
participate, she studied in Den Haag and is married to a Dutch, so she
made her own part.

Monday was very hectic, I was running around making the short videos,
we had to ask a retired musician to bring his video cameras (the one
that the Auditori offered didn’t work), and finally on the last
minutes of the session we recorded “Soldier”. I spent a couple of days
editing it and here it is.

We are suffering the consequences of the crisis as well, our budget
has been cut 30%. If a tutti string player gets sick they are not
replaced; auditions for several positions are on hold; no tours; for
next season they have programmed repertoire that doesn’t pay rights or
require extra players. But nothing compares to what’s happening in
Holland.

This project reminds me of what is happening here in Spain with the
movement called “15M” or “Spanish revolution”. I see this as a
reaction of the orchestras of the world against greedy and ignorant
politicians. We need each other and this is a good start!

Canadian audiences are biting their fingernails about the Black Creek Festival, which has cancelled several events.

Among the dates in jeopardy are three concerts of Beethoven’s Ninth Symphony, played by the London Symphony Orchestra, conducted by Lorin Maazel. Between one Friday rehearsal in Toronto and Saturday performance, Mr Maazel will also conduct the Boston Symphony Orchestra in Tanglewood. How does he do that? Here’s the festival’s version of his schedule:

He will rehearse the LSO in Toronto on Friday, August 26, fly by private jet to Boston that night and  conduct the BSO rehearsal Saturday afternoon and then head immediately to Toronto for that evening’s performance.  We’ve known about his other commitments from the beginning and have scheduled his BlackCreek dates accordingly.

Mr Maazel is 81 years old. What’s he trying to prove? I’ve asked him the question several times and never got a satisfactory answer. Maybe this is it: