Looking for Company at the Tony awards?

Thrilling news from The Sondheim Review that a national CBS television audience is going to be treated to chunks of Company at primetime on June 12. Do not go out that evening. The entire production will also go to selected movie theatres.

The April 2011 Company with The New York Philharmonic was filmed in Avery Fisher Hall at Lincoln Center and will be broadcast to a limited number of movie theaters in the USA and Canada.  This will be one of the first “Broadway-casts” of its kind, beginning Wednesday evening, June 15, 2011. There may be additional broadcasts, depending on the response. Additional locations may be added, so visit this link.

Much of the Company cast will re-assemble to perform live for the Tony Awards on CBS on Sunday evening, June 12, 2011. (Check local listings.) 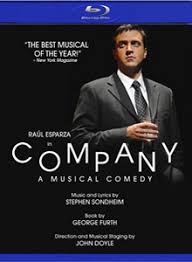