It is abundantly clear that the 14th Tchaikovsky competition differs from its predecessors in one significant respect – its transparency. Every round can be watched live online, viewers are encouraged to cast their votes and several judges are using their cellphones and notebooks to tweet and email their emotions as the contest progresses.

This is not just a necessary and healthy process: it is the perfect antidote to Russia’s Got Talent.

Here’s a personal report from one of the piano judges, who last night reduced the field to eight.

I am incredibly sad for the four who were eliminated. Despite all the mudslinging that is going on on the competition’s own Facebook page – about us as usual going for ‘respectable mediocrity’ – what we went for was a group of all-round musicians, each with a good chance of a great future. That is, at least, what I went for, and as I was almost 100% happy with the result, as was everyone of the jury, I think we can assume that everyone had the same goal. The ‘almost’ is important, because we were all undecided about one, and there was much genuine and extremely well intentioned honest discussion about that one. It has to be remembered that to have put one in to the next round who has not been, another would have to be eliminated

This is what one small-minded self opinionated individual has written – ‘Politics aside, competitors must all walk a kind of narrow tightrope to satisfy the majority of the judges, so we shouldn’t be surprised that real individuality usually goes out the window and we are often left with only respectable mediocrity. Don’t forget that Martha Argerich once resigned from a jury when Pogorelich wasn’t passed……… ‘

The bottom line is that it was hugely difficult to come to a decision for all of us, and in the end it was the concept that the composer rather than the pianist being central to the performance is what should decide it, and we all felt the same way. Many of the Facebook set, although by no means all of them, obviously view things differently. I can say that the people on this jury are wonderfully genuine in their approach, and it is an honour to be working along side them. I can also say that I am learning quite a lot about piano playing from the competitors – so we are by no means setting ourselves up as tin gods. It is a very humbling experience to hear such a phenomenal range of approaches and character from so many great pianists. I wish I could even come near to saying that about most competitions.

Van is here I believe, but I haven’t yet seen him. I am so glad he is here – apparently for the first time since his own triumph in 1958 – as I predict that the end of this competition is going to be and emotional high – or maybe crisis – that will rock the music world in the same way as in his day.

Make of this what you will. I applaud the openness of the event and avidly read incoming tweets from another piano judge, Barry Douglas. Today’s a day off. Some of the judges are going for a tour of the Kremlin. Barry tweets that he’s practising. 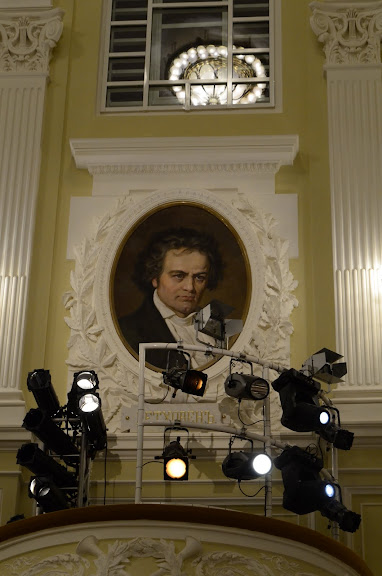