Breaking: opera links up with science geeks… and more

The Glyndebourne opera festival is about to announce live screenings of three productions at the Science Museum in London.

Glyndebourne, under Gus Christie’s and David Pickard’s enlightened leadership, is breaking out of the arts ghetto and seeking synergies with science and technology. The festival is going green with electricity derived from its own wind turbine. Talks have also been going on for some time with the Science Museum to explore common promotions and agendas. Sunday at the opera is a new one for science. Next year, maybe, we’ll have molecules and Mozart. The Science Museum, by the way, already has a dancer in residence.

Even more radical is Glyndebourne’s new link up with the Guardian newspaper, which will carry the last night of the sold out production of Die Meistersinger von Nürnberg live online via guardian.co.uk and glyndebourne.com. The streaming will be available for seven days after the initial broadcast and will be free of charge to viewers. It will be followed by a second relay of Britten’s The Turn of the Screw in August.

This is the first such link-up between any UK newspaper and an opera company. More remarkably, the Guardian lives on the left in slutwear

and Glyndebourne draws its funding from city folk and the filthy rich, stipulating a black-tie dress code. 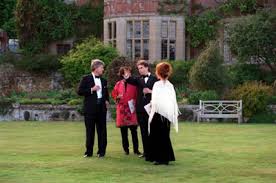 Now what was it Isaiah said about lions lying downs with lambs? and which one here’s the vegetarian?

Oh, I could get so excited… we live in revolutionary times.

« Who wins, who loses, from Berlin's slap in Salzburg's face

Strictly for the Korngold curious »