From the Arts Council's rubbish bin

Arts Council England has responded with its usual dismissals to a highly critical report, published today, by the House of Commons select committee on Culture, Media and Sport.

The Committee attached ACE for spending too much on itself, lacking a clear purpose for the works of art it owns, favouring big organisations over small ones, among other faults.
The Council responded – to the Guardian, where it gets a soft landing – that the Committee was working from old information and biased witnesses. 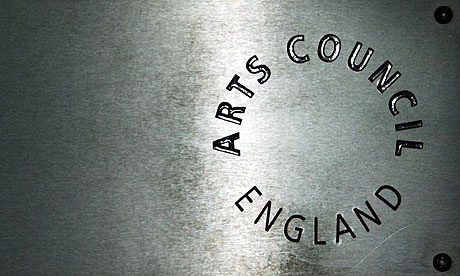 It’s the standard rubbishing tactic. Exactly the same ACE response, in exactly the same words, was trickled to the Guardian last year when I and others appeared before the Committee to testify on the Council’s many weaknesses.
Can’t the ACE come up with a new tune? Of course, it can’t. That’s the problem.
And this week the arts in England will discover just how flawed the Council has been in its allocation of diminished funds.
Watch this space.
Here, meantime, is a summary of the Committee’s report:

Cuts could be
‘disastrous’ for arts and heritage, but level of spending was unsustainable,
Committee says

A Report released
today (Monday 28 March) from the Culture, Media and Sports Committee acknowledges
that cuts in public spending will have a major impact on arts and heritage
organisations, and some may well be forced to close.  However, the Report, Funding of the Arts and Heritage, also
notes that over recent years the arts have enjoyed a period of high levels of
public investment and criticises the Arts Council in particular for wasting
money on some projects.

“Arts and heritage in Britain are among our greatest assets. They
bring both great cultural and economic benefits. Since the Second World War,
most arts and heritage organisations have operated on a mixed funding model,
whereby their income is made up partly of public subsidy and partly of private
investment and earned revenue. This model has worked for them, and our
Committee continues to support mixed funding.

However, we also
highlight that over the past twenty years the arts have enjoyed a period of particularly
high levels of public investment. While this has created a vibrant and successful
arts scene in the UK, there has also undoubtedly been waste. Our Report
highlights in particular the case of the Public gallery in West Bromwich, which
the Committee considers a gross waste of public money by the Arts Council.

We
realise that cuts in public spending will have a major impact on arts and
heritage organisations, forcing some closures and we regret that. However, at a
time when cuts are biting across the board,
it is right that all sectors share the burden. Our Report suggests ways
in which arts and heritage organisations might improve financial management and
explore other funding schemes.”

The Report
notes that the financially comfortable period of recent years led to the Arts
Council’s spending on its own administration to rise to much too high a level. Government
funding for Arts Council England increased by just over 150% to £453 million in
the 12 years to 2010, while funding for English Heritage fell in real terms.
While the Arts Council has undergone considerable change in recent years and
has already cut its administration budget by over 50% the Committee believes
that a further 50% cut can be managed.

The Report
welcomes the launch of the Arts Council’s National Portfolio funding programme,
and notes that it has the potential to offer more strategic and finessed
funding arrangements with arts bodies. However, the Committee is concerned about
the timescale – the Arts Council intends to assess all the applications for the
National Portfolio and to draw up funding agreements, in just two months. Given
that so many arts organisations will not make it into the National Portfolio,
the short time frame will inevitably leave the Arts Council open to criticisms
that its selection process lacked rigour.

The Committee
acknowledges the vital role played by the Arts Council in supporting a myriad
of groups across the whole sector. Without this support many would certainly
cut back or close. There have been mistakes, however, and the Report highlights
the case of The Public gallery in West Bromwich as perhaps the worst example of
a gross waste of public money by the Arts Council.

The Report
examines the Government’s review of arm’s length bodies, and notes the
surprising decision to abolish the UK Film Council, Museums, Libraries and
Archives Council and the Public Lending Right. The Committee disparages the
Government’s lack of dialogue with these bodies during its review, as well as
the surprising way they were informed of their abolition. The Report also
raises concerns that the Government’s decision was taken without any clear idea
of which bodies would take on their respective functions.

With regard to
the Museums, Libraries and Archives Council, the Committee is concerned that
the Arts Council – itself under pressure – will not be as effective a
replacement and urges the Government to review its decision again in 2012. With
regard to the Public Lending Right body, the Report notes that no one who gave
evidence to the Committee supported the decision to abolish it. The Report recommends
that the Authors’ Licensing and Collecting Society, not the British Library, is
the appropriate organisation to administer the body’s work.

The Report acknowledges
the concerns of arts organisations across the board about the reduction in arts
spending by local authorities, in combination with spending cuts from the Arts
Council and notes that the impact of this “double-whammy” could be disastrous
for some arts bodies.

The Committee recognises the important contribution
that sponsorship and philanthropy can make to support for the arts. It regrets
the decision to withdraw all funding from Arts & Business after 2012 and
notes that the Government’s philanthropy strategy, launched in December, made
no mention of reform to the tax and gift aid system. Therefore the Committee
very much welcomes the review of these systems, announced in the Budget on 23
March.

The Report
acknowledges the importance of safeguarding the UK’s heritage, as once lost it
is lost forever. The sector relies on expertise and skilled professionals and the
Committee notes, with concern, the continuing decline in local authority
conservation officers and the impact this will have on the local planning
decisions that affect heritage. Other sources of advice, such as the network of
local architecture and design centres sponsored by the Commission for
Architecture and the Built Environment (CABE), also face a precarious future
and the Report urges the Government to act to halt this loss of expertise
across the sector.

The Committee
commends the Government’s recognition of the importance of heritage tourism in
Visit Britain’s budget, but notes that the heritage sector has already suffered
disproportionately from funding reductions over the years. The abolition of the
Regional Development Agencies will result in the loss of another important
funding stream. The Report calls on the Government to take account of the
burden our heritage sector has already shouldered when making future funding
settlements.

Committee Membership is as follows: