Boston Symphony chief Mark Volpe has announced James Levine’s resignation, effective September. Since he has cancelled the rest of the season, that means effective immediately.

The announcement, a face-saving device, was chanelled by his agent through the supine medium of the New York Times, rather than a more critical and combative Boston press. Here’s Boston’s later version of the story, without access to Levine.
After two years of prevarication, no-one emerges from the episode with much credit. 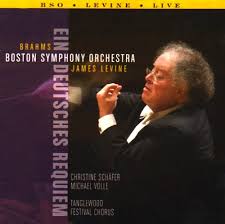 Levine said: “This has been brewing in my mind for a long time,” he said in a telephone interview. “Each time that I had to cancel because of illness or each time that I arrived and wasn’t my best, I kept thinking we can’t keep this up. This isn’t right for the orchestra or the audience or me.”
Volpe added that the situation was ‘not tenable’.
After two years of prevarication, no-one emerges from the episode with much credit. Levine was indulged by the Boston management while his Machiavellian agent, Ronald Wilford, put together ever more fantastical reasons for his retention. He should have quit two seasons ago when the workload became too arduous, But Levine, who had never had an orchestra to call his own, was determined to go out on a high. Sadly, that ambition was thwarted,

Who's in the Boston line-up? »